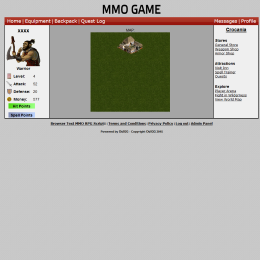 
We are designing this script so that someone with no programming knowledge has the ability to start there very own browser based MMORPG.

Once a class is chosen, Players always have something to improve on weather it's gaining levels, improving stats (Attack, Defense, Health, Mana) or gathering more gold. You have the ability to name each place on the map as well as custom greetings and names for shops and inns. Allow your players to gain benefits in game by using subscribing or by placing ads within the game. Players have the ability to run there own guild which includes promotions and demotions inside the guild. Players can fight monsters to gain items, gold and experience to level up their characters. Players if they dare can fight other players in the same location they are at for a chance of stealing some gold. Shop around at different shops including a weapons store, armour store, Magic Store and Inn.

Once you have the script installed you can set yourself up an Administration account (As well as others) and access the back end of the website where you can set all the specifics of your game.